You are here: Home / News / Strong Irish appetite for exports to Malaysia 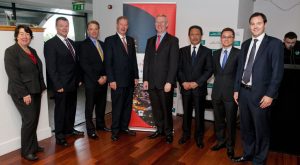 At a recent seminar in Dublin’s Croke Park, hosted by the Irish Exporters Association Asia Trade Forum and the Ireland Malaysia Association, speakers presented a strong case for the growth potential of Irish exports to Malaysia.  The Malaysian government’s low cost access to local-currency finance, its net external creditor status and recent reforms of its public-sector enterprises were all cited as providing a cushion against near-term payment risks.

The event was attended by His Excellency Dato’ Ramli Naam, Malaysian Ambassador to Ireland, Patron of the Ireland Malaysia Association, Minister Jimmy Denihan, Minister of Arts, Heritage and the Gaeltacht and 85 CEOs from leading Irish exporters.  Vincent Teo, Vice Chairperson of IMA said ‘Working with our IMA members, we see the opportunities that are becoming a reality for Irish exporters.  There is a huge appetite for expansion into the ASEAN region and Malaysia is viewed as a spring board for this growth.

Malaysia, as South East Asia’s third largest economy, has withstood the global economic slump, and has successfully expanded its economy by 5.4% in the last quarter.   It has hosted three of the world’s six largest IPOs by companies this year and is a key Asian market.

Hugh Kelly, Chairman of the Asia Trade Forum, paid tribute to the efforts of the Irish embassy staff in Kuala Lumpur, and Enterprise Ireland’s and Bord Bia’s support and work on behalf of exporters but stressed the need for more front-loaded spending on promoting Ireland’s image in Malaysia. “This is necessary to provide the platform from which Irish exporters of goods and services can launch into and grow in this strong and growing market.”

Exporters were urged to take advantage of the planned events taking place in Malaysia in 2012: